Wafer-level integration of electronics and photonics

What is an Optical Interposer?

Interposers have been used for several years to allow electronic devices (microprocessors, memory devices, etc.) to communicate with each other via high-speed metal traces embedded in a semiconductor wafer. POET invented methods for embedding or placing photonic devices or features (lasers, detectors, waveguides, filters, etc.) within the top layer of an interposer, allowing high speed communication between electronic and photonic devices.

The POET Optical Interposer consists of layers of materials built on a standard semiconductor wafer of any size, using standard semiconductor (CMOS) processes. The bottom layers include the high-speed metal traces found in electronic interposers, while the top-most layers incorporate waveguides that guide and focus light, other passive devices (e.g., filters and gratings) and features which enable the accurate placement and integration of active devices.

The POET Optical Interposer is a platform technology.  It offers the ability to produce Opto-electronic devices of various kinds in high volumes with the efficiencies of wafer-level processing.  The low-cost integration scheme and scalability of the POET Optical Interposer brings value to any device or system that integrates electronics and photonics, including some of the highest growth areas of computing, such as Artificial Intelligence (AI), the Internet of Things (IoT), autonomous vehicles and high-speed networking for cloud service providers.

What makes the POET Optical Interposer so unique? 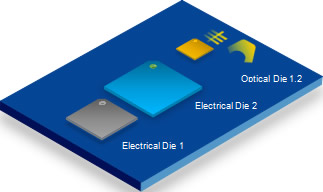 Photonic components are fabricated or placed on the top layer of a silicon wafer or device produced with standard CMOS processing. High-speed communication is achieved between the electrical layers and the optical layers using the copper traces embedded in the wafer. 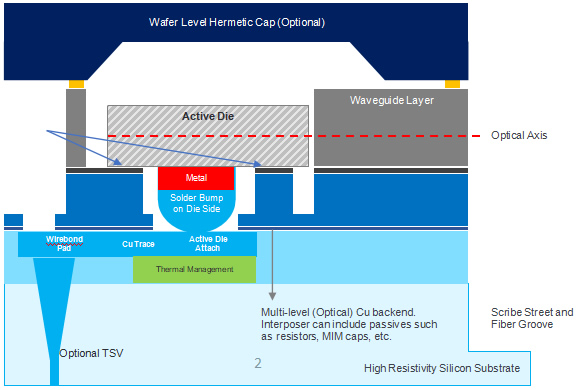 What is a transceiver?

Transceivers convert digital electrical signals generated by conventional electronic devices into light waves that can be transmitted over optical fibers with higher data density, lower loss and lower cost than copper wire.  In the reverse direction, the light waves are detected and converted back to digital electrical signals that can be transmitted using copper or another transmission medium.

Video on demand is the largest driver of mega data centers that are being built at an astonishing rate.  Such data centers are often referred to as the “cloud.” There are hundreds of thousands of transceivers in a mega-scale data center, connecting acres of racks holding thousands of on-line memory storage devices and servers to switches and then to distant points for distribution to users. The cost of building a data center (including the transceivers) is very large, and any technology that promises to reduce cost will catch the attention of the data center operators.  POET’s Optical Engines reduce the cost of transceivers. Under a different configuration, POET’s Optical Interposer also promises to allow a different architecture of the data center itself, by co-packaging network switching devices directly with optics, further reducing costs for data center operators.

What is an Optical Engine?

An Optical Engine (OE) includes only those parts of the transceiver module that convert the digital electrical signals into light signals, something that can only be done using certain types of compound semiconductor materials (e.g., Indium Phosphide, Gallium Arsenide). These materials are fabricated into so-called “active” devices (e.g., lasers, detectors, etc.). In addition, the OE includes waveguides that couple the light from the active devices and move it through “passive” devices (e.g., multiplexers and de-multiplexers, spot size converters) and eventually into the fiber. The reverse process of converting light signals back into electronic signals is also included in an OE.  The Optical Engine is not a complete transceiver, but it is the highest value part of the transceiver module, typically representing over 50% of the cost. 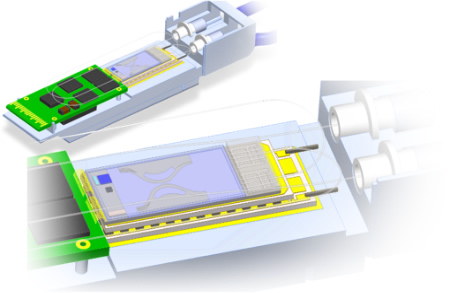 How does the cost of building a POET Optical Interposer compare to more conventional approaches?

The costliest steps in the assembly of an optical engine are the placement of lasers, lenses, detectors, filters and fibers on the device.  Each time such a component is positioned, the optical alignment must be tested to ensure optimal transmission of light.  This can only be done one single placement and alignment at a time. Each time it is done and fails, production yield falls. There are several “yield points” associated with conventional approaches to transceiver design.

In contrast to Conventional approaches, the POET approach:

Inside the POET Optical Interposer

What are the key components to the Optical Interposer?

How does the POET Optical Interposer achieve chip-scale integration and wafer-scale assembly and testing?

Combined, all the features noted above and those shown below, enable the passive “pick-and-place” assembly of the POET Optical Interposer, eliminating the need for active optical alignment required by conventional approaches.

To retain its elegant design and to enable placement of devices without the costly procedure of active alignment with each device placement, lasers and other active devices are designed to be “flip-chipped” onto the surface of the POET Optical Interposer.  All passive components (mux – de-mux filters, gratings, spot-size converters, etc.) are built into the POET Optical Interposer waveguide layer. Any active device, including lasers, modulators, detectors, etc., can be coupled into the waveguide. Because loss from the waveguides is low across a wide energy spectrum, including visible and non-visible light, the POET Optical Interposer can be used to enable a wide variety of applications, providing a truly versatile platform technology.

An Optical Interposer-based Optical Engine for a 100G transceiver

From fabrication of an 8” POET Optical Interposer wafer, to the placement of active devices and fiber blocks onto the wafer using pick and place tools, to the testing of each Optical Engine, to the capping, sealing and singulation of the devices, the entire process is done at wafer scale, providing an across the board reduction in cost.

The power of wafer-scale fabrication, test and assembly – drives down cost with unlimited scalability. 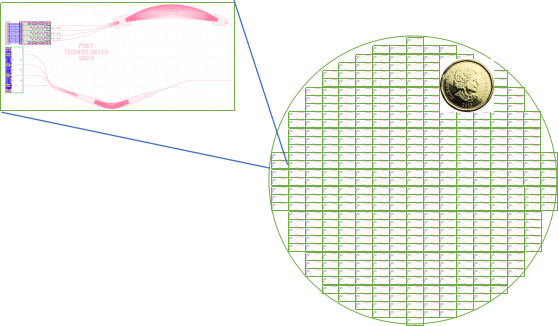 A POET Optical Engine for a 400G transceiver – over 500 devices processed at the same time on a standard 8”silicon wafer.

Notwithstanding the cost reductions and scalability achieved with the POET Optical Interposer approach to building an Optical Engine, how does it measure up to other technologies with respect to performance?

Each of the lines of this 4-channel waveguide-integrated Multiplexer was formed from testing hundreds of individual devices.  The smoothness of the lines shows the consistency of performance, with virtually no insertion loss. 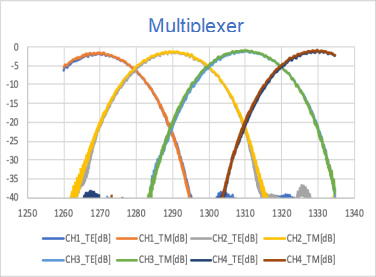 A high level of performance of a De-Multiplexer is more difficult to achieve.  Shown are the results of both Single and Multi-Mode waveguide integrated DeMux devices. 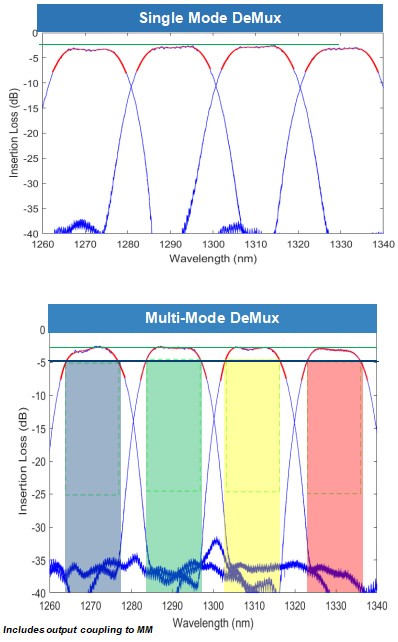 POET’s own design of a high-speed, side-entry PIN photodetector is capable of operating at speeds suitable for 400G transceivers. 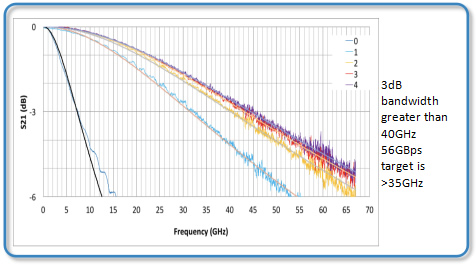