TORONTO, Ontario, May 11, 2021 – POET Technologies Inc. (“POET” or the “Company”) (TSX Venture: PTK; NASDAQ: POET), the designer and developer of the POET Optical Interposer™ and Photonic Integrated Circuits (PICs) for the data center and tele-communication markets, today reported its unaudited condensed consolidated financial results for the first quarter ended March 31, 2022. The Company’s financial results as well as the Management Discussion and Analysis have been filed on SEDAR. All financial figures are in United States dollars (“USD”) unless otherwise indicated.

Management Comments
“The first quarter has been an active period of sampling and expanding customer engagement,” stated Dr. Suresh Venkatesan, Chairman & CEO. “We were able to leverage our success at OFC where we demonstrated our 200G FR4 Transmit and 400G FR4 Receive optical engines. POET received significant notoriety for being the only company to showcase a chip-scale integrated FR4 optical engine, offering substantial size, energy efficiency and cost benefits compared to alternative solutions based on the DR4 standard, resulting in heightened interest from companies that we have not been engaged with previously. We are focused on advancing our efforts to convert this interest to customer orders in the coming quarters.”

Non-cash impact of joint venture in the first quarter of 2022 was $0.4 million compared to nil in the same period of 2021 and $1.0 million in the fourth quarter of 2021. The Company’s share of loss is approximately 88.5% of the loss of Super Photonics Xiamen, the Company’s joint venture with Sanan IC. The Company's current share of the operating loss is a result of the high value of the Company's initial contribution. 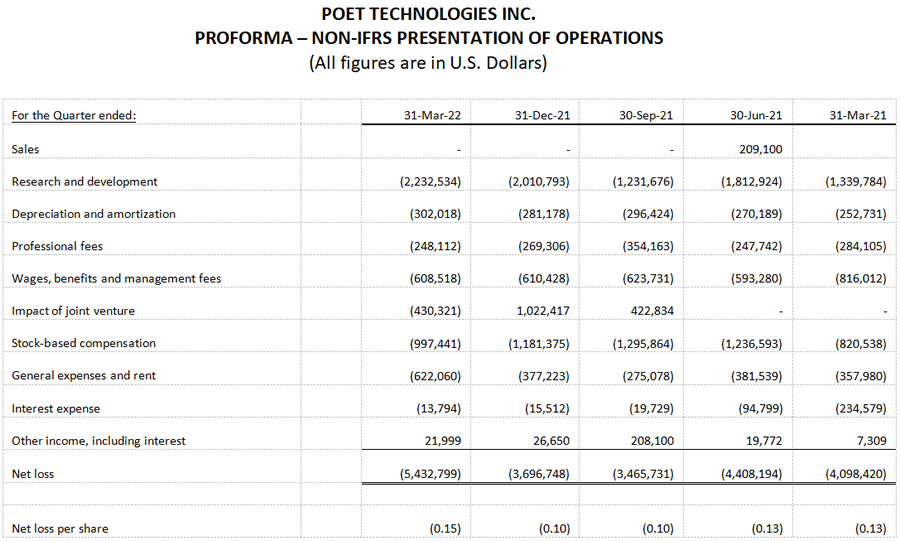 
This news release contains “forward-looking information” (within the meaning of applicable Canadian securities laws) and “forward-looking statements” (within the meaning of the U.S. Private Securities Litigation Reform Act of 1995). Such statements or information are identified with words such as “anticipate”, “believe”, “expect”, “plan”, “intend”, “potential”, “estimate”, “propose”, “project”, “outlook”, “foresee” or similar words suggesting future outcomes or statements regarding any potential outcome. Such statements include the Company’s expectations with respect to the success of the Company’s product development efforts, the performance of its products, the expected results of its operations, meeting revenue targets, and the expectation of continued success in the financing efforts, the capability, functionality, performance and cost of the Company’s technology as well as the market acceptance, inclusion and timing of the Company’s technology in current and future products.