TORONTO, Ontario, August 19, 2021 – POET Technologies Inc. (“POET” or the “Company”) (TSX Venture: PTK; OTCQX: POETF), the designer and developer of the POET Optical Interposer™ and Photonic Integrated Circuits (PICs) for the data center and tele-communication markets, today reported its unaudited condensed consolidated financial results for the second quarter ended June 30, 2021. The Company’s financial results as well as the Management’s Discussion and Analysis have been filed on SEDAR. All financial figures are in United States dollars (“USD”) unless otherwise indicated.

Second Quarter Financial (non-IFRS) and Recent Business Highlights:
The Company continued to execute on its stated strategic plan during the second quarter and achieved the following significant milestones during and subsequent to the three months ended June 30, 2021:

Management Comments
“2021 continues to be a transformative year for the Company,” stated Dr. Suresh Venkatesan, Chairman & CEO. “Although supply chain constraints across the broader semiconductor market contributed to scheduling challenges during the first half of the year, we’ve continued to take actions to minimize the impact on our product development timelines and ongoing engagements with customers. We currently have a double-digit number of customers targeted for initial distribution of prototype samples, including customized designs for specific customers and applications. We are also receiving strong interest from prospective customers for custom, differentiated LR4 designs for client-side telecom network applications.

“Additionally, the team is finalizing preparations for the China International Optoelectronic Exposition (CIOE), now scheduled to be held September 16-18, along with our joint venture team at Super Photonics Xiamen. Prior to and during CIOE, we will be delivering samples of 100G and 200G optical engines as well as 400G Receive (Rx) optical engines to select customers. We’ve also partnered with Shanghai-based Siluxtek and will be conducting a live demonstration of a 400G FR4 Transmit (Tx) optical engine concurrent to the show at our Xiamen lab.

“With continued execution of our strategic plan and growing product development activity in the second half of 2021, our focus will remain on realizing our vision for POET of becoming a global leader in chip-scale photonic solutions based on our Optical Interposer technology that enables a broad range of vertical market applications.”

Annual General Meeting of Shareholders (AGM)
The Company’s annual and special meeting of shareholders (the “Meeting”) will be held at 1:00 p.m. Eastern Time on Thursday, October 7, 2021 (the “Meeting Date”) via a virtual on-line platform. Shareholders of record on August 25, 2021 (the “Record Date”) will receive notice and attend the Meeting virtually, using the on-line platform, which will allow attendees to vote, ask questions and participate electronically in real-time. 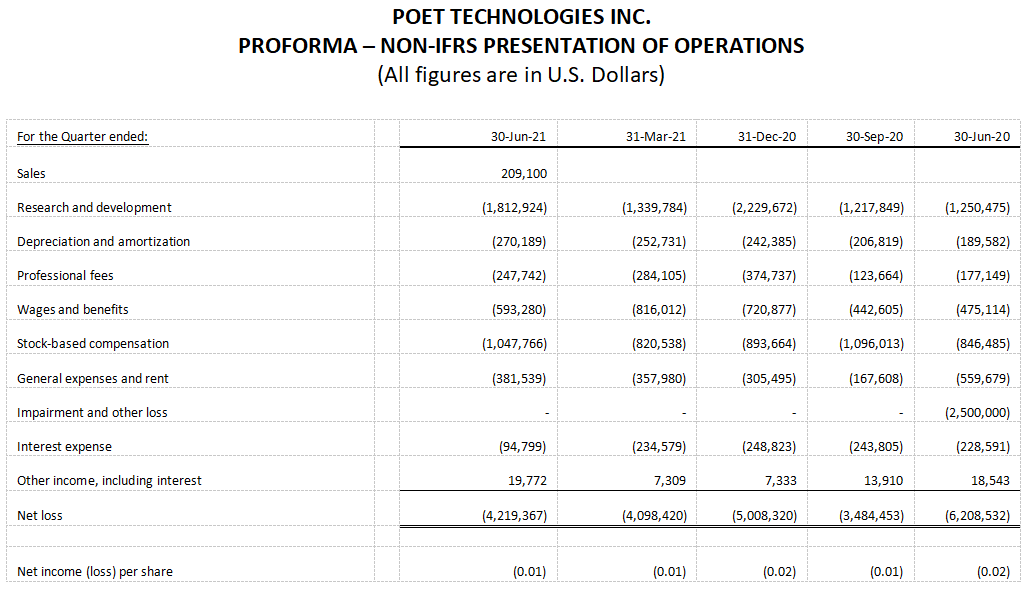 This news release contains “forward-looking information” (within the meaning of applicable Canadian securities laws) and “forward-looking statements” (within the meaning of the U.S. Private Securities Litigation Reform Act of 1995). Such statements or information are identified with words such as “anticipate”, “believe”, “expect”, “plan”, “intend”, “potential”, “estimate”, “propose”, “project”, “outlook”, “foresee” or similar words suggesting future outcomes or statements regarding any potential outcome. Such statements include the Company’s expectations with respect to the success of the Company’s product development efforts, the performance of its products, the expected results of its operations, meeting revenue targets, and the expectation of continued success in the financing efforts, the capability, functionality, performance and cost of the Company’s technology as well as the market acceptance, inclusion and timing of the Company’s technology in current and future products.