TORONTO, Ontario, November 18, 2020 – POET Technologies Inc. (“POET” or the “Company”) (TSX Venture: PTK; OTCQX: POETF), the designer and developer of the POET Optical Interposer™ and Photonic Integrated Circuits (PICs) for the data center and tele-communication markets, today reported its unaudited condensed consolidated financial results for the third quarter ended September 30, 2020. The Company’s financial results as well as the Management Discussion and Analysis have been filed on SEDAR. All financial figures are in United States dollars (“USD”) unless otherwise indicated.

Board Resignation
POET also announced that one of its directors and former executive chairman, David Lazovsky, has notified the Company that he will be resigning from the Board as of the end of November to dedicate full-time to his most recent venture, Inorganic Intelligence.

Management Comments
“During the third quarter, we made extraordinary progress on our product development efforts on the Optical Interposer platform, and in several instances, exceeding our own internal performance metrics,” said Dr. Suresh Venkatesan, the Company’s Chief Executive Officer. “We intend to release this data publicly once we have collected additional data from our product tests with potential customers. We are also actively engaged with our strategic partner, Sanan IC, under the newly formed joint venture aimed at the development and manufacturing of optical solutions for the data communications and telecommunications markets. Lastly, I would like to take this opportunity to thank Dave for his several years of service to POET, including serving as executive chairman for three years. Dave was instrumental in helping to guide the Company's strategy and provided insightful aid in discussions with potential strategic partners.” 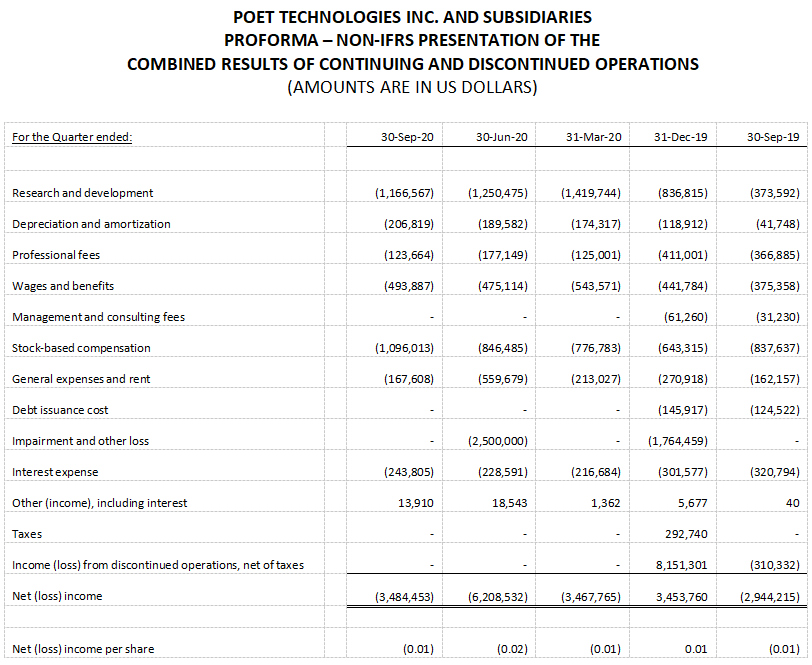 Such forward-looking information or statements are based on a number of risks, uncertainties and assumptions which may cause actual results or other expectations to differ materially from those anticipated and which may prove to be incorrect. Assumptions have been made regarding, among other things, management’s expectations regarding the success and timing for completion of its development efforts, financing activities, future growth, the form and potential of its planned joint venture, if approved, plans for and completion of projects by the Company’s third-party consultants, contractors and partners, availability of capital, and the necessity to incur capital and other expenditures. Actual results could differ materially due to a number of factors, including, without limitation, operational risks in the completion of the Company’s anticipated projects, a delay or abandonment of its planned joint venture, delays or changes in plans with respect to the development of the Company’s anticipated projects by the Company’s third-party relationships, risks affecting the Company’s ability to execute projects, the ability of the Company to generate sales for its products, the ability to attract key personnel, and the ability to raise additional capital. Although the Company believes that the expectations reflected in the forward-looking information or statements are reasonable, prospective investors in the Company’s securities should not place undue reliance on forward-looking statements because the Company can provide no assurance that such expectations will prove to be correct. Forward-looking information and statements contained in this news release are as of the date of this news release and the Company assumes no obligation to update or revise this forward-looking information and statements except as required by law.