TORONTO, Ontario, April 29, 2020 – POET Technologies Inc. (“POET” or the “Company”) (OTCQX: POETF; TSX Venture: PTK), the designer and developer of the POET Optical Interposer and Photonic Integrated Circuits (PICs) for the data center and tele-communication markets, today reported its audited consolidated financial results for the full year ended December 31, 2019. The Company’s financial results as well as the Management Discussion and Analysis have been filed on SEDAR.

Financial Summary
Due to the sale of its wholly owned subsidiary, DenseLight Semiconductor Pte Ltd (“DenseLight”), the Company is required to report the activities of DenseLight as a discontinued operation with effect from January 1, 2019. The financial statements filed today reflect this classification.  The Company operated as a single integrated entity until November 8, 2019, the Closing Date of the sale transaction.  For comparative purposes, all financial data below represent the combined results from both continuing and discontinued operations and is presented on a proforma, non-IFRS basis in the table at the bottom of this press release.  The required IFRS presentation of the Company’s Financial Statements can be found in its recent filings on SEDAR.

With the sale of DenseLight, the Company recognized only one month of revenue in the fourth quarter of 2019. Revenue in the third quarter of 2019 was US$1.2 million. Fourth quarter 2018 revenue was US$1.6 million. Even with a stub period in the fourth quarter of 2019, revenue for the full year increased by US$0.5 million, or 14%, to US$4.4 million compared to revenue of US$3.9 million in 2018.  The increase resulted primarily from an increase in NRE revenue that DenseLight began recognizing in late 2018. For the full year 2019 the increased NRE contributed to higher gross margin of US$3.2 million, or 73% of revenue, compared to US$2.4 million, or 62% of revenue, in 2018.

During the fourth quarter of 2019, the Company repaid US$4.0 million of bridge loans and a promissory note plus accrued interest to certain debt holders per the debt agreements. The Company ended the year with $1.4 million in cash and cash equivalents.

In order to provide the combined business performance and financial position prior to the sale of DenseLight, certain non-IFRS financial performance measures have been combined to show an aggregate number. Such proforma combined numbers are illustrative only and actual figures may vary materially. 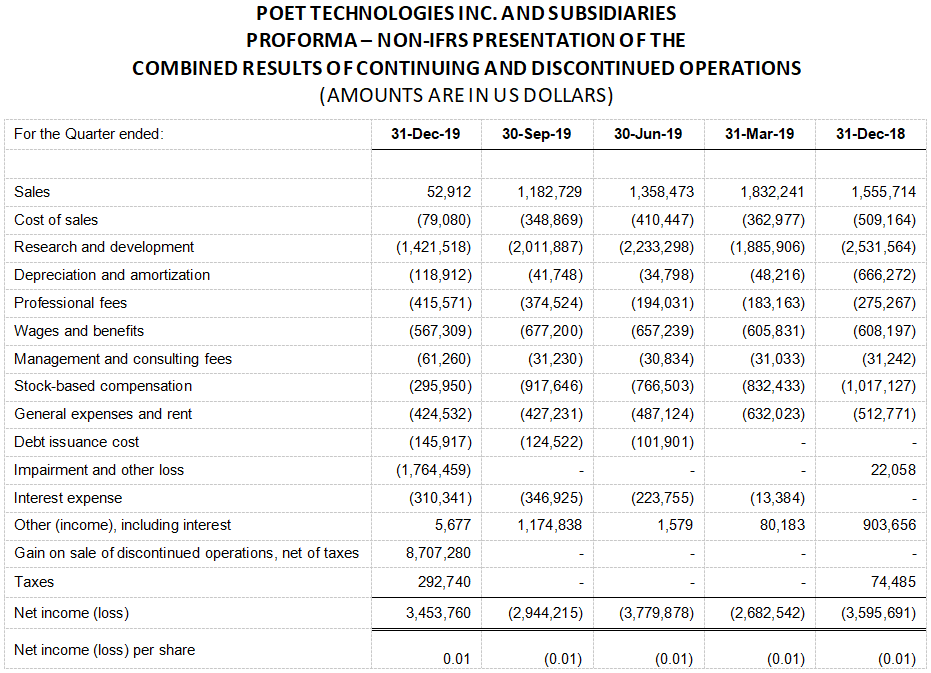