TORONTO, Ontario, November 14, 2022 – POET Technologies Inc. (“POET” or the “Company”) (TSX Venture: PTK; NASDAQ: POET), the designer and developer of the POET Optical Interposer™, Photonic Integrated Circuits (PICs) and light sources for the data center, tele-communication and artificial intelligence markets, today reported its unaudited condensed consolidated financial results for the third quarter ended September 30, 2022. The Company’s financial results as well as the Management Discussion and Analysis have been filed on SEDAR. All financial figures are in United States dollars (“USD”) unless otherwise indicated.

Management Comments
Dr. Suresh Venkatesan, Chairman & CEO commented, “We are making great progress toward the two key objectives we outlined at the end of last quarter. First, we completed the design of our 400G FR4 DML laser powered chiplet  and secured a supply of breakthrough DMLs from Lumentum, one of the world’s leading laser suppliers. This exciting development serves as both a foundation and a distinct competitive advantage as we scale our platform technology to address 800G and 1.6T pluggable transceivers. Additionally, we advanced our second objective with the recognition of $0.2 million of revenue from Celestial AI, which reaffirmed its commitment to use POET’s Lightbar packaged light source. We expect to deliver alpha samples to Celestial AI within just a few weeks consistent with our roadmap. We also demonstrated an Optical Interposer-powered thin-film lithium niobate modulator based 400G Tx solution and expect to demonstrate further improvements in the design of such modulators at the CIOE in December.  Having developed and established the base capabilities of the Optical Interposer using 100G/200G components, POET is quickly ratcheting up its capabilities to serve the high end of the market with 800G/1.6T solutions.”
“As discussed at our annual meeting of shareholders, we are confident that we will achieve a key step toward commercialization of several products by year end and be in full commercial production in 2023.  We are targeting production release of four products by the end of this year and another four in the first half of next year. In the coming months, we expect to expand sampling of our portfolio of 100G, 200G and 400G transmit and receive optical engines in support of growing our pipeline of design wins, together with advancing our ongoing development efforts on next-generation optical engines with strategic customers to enable 800G and 1.6T pluggable transceivers for hyperscale data centers.”
Based on published research from leading market research firms, POET has calculated that its served market for transceiver modules will expand from approximately $4 billion in 2023 to approximately $7 billion in 2027.  POET estimates that the market for its packaged light source products, in which it believes it has a material competitive advantage, will begin to emerge in 2024 and will grow rapidly to over $5 billion in 2027, vastly exceeding the transceiver market in volume and value in subsequent years.

Non-IFRS Financial Summary
The Company reported non-recurring engineering revenue (“NRE”) of $233,000 in the third quarter of 2022 compared to $nil for the same period in 2021 and $120,000 in the second quarter of 2022. The Company provided services under an NRE contract to one customer throughout 2021. In 2022, the Company is now providing similar services to multiple customers, one of which continued to contract services from last year. The revenue relates to unique projects that are being addressed utilizing the capabilities of the POET Optical Interposer. 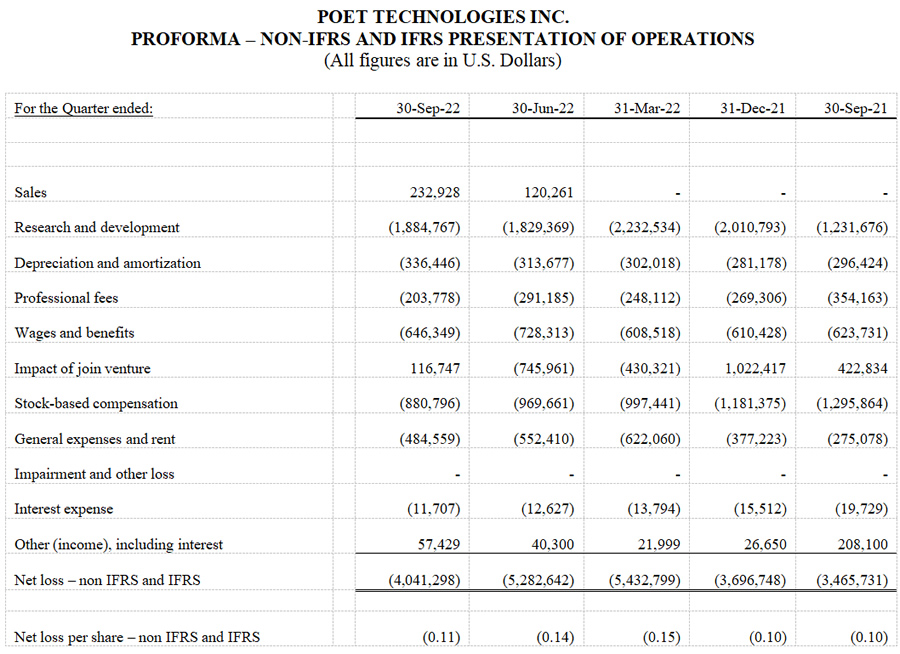 Grant of Options to Directors, Officers and Employees
As part of the Company’s stock option program, on November 11, 2022, the Board of Directors granted a total of 1,395,144 options to purchase common shares to directors, officers and employees of the Company. The total included 268,894 options to non-management directors, 450,000 to officers and 676,250 to other employees. The options granted to directors and officers have an exercise price of C$4.00, which is higher than the current market price and are exercisable for 10 years following the grant. 25% of the directors’ options vest upon grant and the balance vests quarterly until August 11, 2023. The grant to the directors represents the option portion of directors’ fees for the 12-month period beginning August 1, 2022. The options granted to other employees are exercisable for 10 years at a price of C$3.54. All options granted to officers and other employees shall vest quarterly in arrears over sixteen (16) quarters, with the first vesting date being February 11, 2023, with equal amounts vesting at the end of each 3-month period thereafter. All of the options expire on November 11, 2032.

This news release contains “forward-looking information” (within the meaning of applicable Canadian securities laws) and “forward-looking statements” (within the meaning of the U.S. Private Securities Litigation Reform Act of 1995). Such statements or information are identified with words such as “anticipate”, “believe”, “expect”, “plan”, “intend”, “potential”, “estimate”, “propose”, “project”, “outlook”, “foresee” or similar words suggesting future outcomes or statements regarding any potential outcome. Such statements include the Company’s expectations with respect to the success of the Company’s product development efforts, the performance of its products, the expected results of its operations, meeting revenue targets, and the expectation of continued success in the financing efforts, the capability, functionality, performance and cost of the Company’s technology as well as the market acceptance, inclusion and timing of the Company’s technology in current and future products and expectations for approval of proposals at the Company’s annual meeting of shareholders.

Such forward-looking information or statements are based on a number of risks, uncertainties and assumptions which may cause actual results or other expectations to differ materially from those anticipated and which may prove to be incorrect. Assumptions have been made regarding, among other things, management’s expectations regarding the success and timing for completion of its development efforts, the introduction of 800G modules based on 400G optical engine developments, financing activities, future growth, recruitment of personnel, opening of offices, the form and potential of its joint venture, plans for and completion of projects by the Company’s third-party consultants, contractors and partners, availability of capital, and the necessity to incur capital and other expenditures. Actual results could differ materially due to a number of factors, including, without limitation, the failure of its products to meet performance requirements, missing the window for 800G modules based on 400G optical engines, lack of sales in its products, once released, operational risks in the completion of the Company’s anticipated projects, lack of performance of its joint venture, delays in recruitment for its newly opened operations or changes in plans with respect to the development of the Company’s anticipated projects by third-parties, risks affecting the Company’s ability to execute projects, the ability of the Company to generate sales for its products, the ability to attract key personnel, the ability to raise additional capital and the agreement by shareholders to approve proposals put forth by the Company at shareholders’ meetings. Although the Company believes that the expectations reflected in the forward-looking information or statements are reasonable, prospective investors in the Company’s securities should not place undue reliance on forward-looking statements because the Company can provide no assurance that such expectations will prove to be correct. Forward-looking information and statements contained in this news release are as of the date of this news release and the Company assumes no obligation to update or revise this forward-looking information and statements except as required by law.