TORONTO, Ontario, August 8, 2022 – POET Technologies Inc. (“POET” or the “Company”) (TSX Venture: PTK; NASDAQ: POET), the designer and developer of the POET Optical Interposer™ and Photonic Integrated Circuits (PICs) for the data center and tele-communication markets, today reported its unaudited condensed consolidated financial results for the second quarter ended June 30, 2022. The Company’s financial results as well as the Management Discussion and Analysis have been filed on SEDAR. All financial figures are in United States dollars (“USD”) unless otherwise indicated.

The Company has identified two key milestone objectives for the balance of 2022: a) the development of a 400G FR4 multiplexed TX engine that will be combined with the existing 400G RX to create a full transmit and receive sub-assembly for a 400G transceiver module; and b) the delivery of samples of a packaged light source assembly for Celestial AI, a lead customer in the emerging growth market for Artificial Intelligence – Machine Learning (AI-ML) accelerator chips. The 400G FR4 TX and RX optical engines are the building blocks for an 800G FR4 optical engine that POET intends to introduce to the market in time to capture a major inflection point identified in the April 2022 LightCounting forecast report, in which deployment of 800G (2X400G) and 1.6T transceiver modules are expected to grow from about 2 million units in 2024 to 14 million units by 2027, a compounded annual growth rate of nearly 80%.  For packaged light sources, the ultimate market potential is larger, with estimates of the total market size being approximately $125 billion by 2027, which the Company estimates will offer a serviceable market opportunity of over $4 billion by 2027.

In support of the strategy to develop transceiver modules, the Company has also modified the Optical Interposer platform so that it can more readily accept lasers from leading global suppliers, and included the capability to assemble the necessary electronic components directly onto the interposer platform. POET has developed and will sample later this year, a 400G RX with an integrated Trans Impedance Amplifier (TIA) and a 200G FR4 TX with an integrated laser driver. This integration of additional electronics components has demonstrated a further increase in performance of the optical engines and simplified module board design for customers.

Management Comments
“Following the live demonstration of our 200G FR4 multiplexed TX and RX optical engines and our ground-breaking live demonstration of our 400G/800G FR4 multiplexed RX engine at the Optical Fiber Conference in March, we received multiple requests for technical data, samples and meetings with interested customers and business partners. We are executing well towards our dual strategy to make available integrated optical engines for 100/200G to promote market traction and acceptance, while simultaneously delivering more differentiated solutions at 400/800G and beyond. There is a strong desire among module companies to embrace our approach as we qualify our solutions and demonstrate the required levels of reliability and manufacturability by releasing our solutions to production. We have already begun the process of validating performance, reliability and manufacturability with select customers who are designing modules with our 100G and 200G optical engines,” said Dr. Suresh Venkatesan, Chairman & CEO.

“Even though the vast majority of 100/200/400G optical transceivers sold today are built using discrete sub-assemblies, the discussions during the recent PIC conference strongly indicate that the industry is rapidly approaching a period in which hybrid integration will be recognized as one of the few paths to meeting the scale, size and energy performance requirements of the industry. As the number of channels increase from 4 to 8 to 16 (in going from 400G to 1.6T), the balance between conventional assembly and integrated assembly transitions quickly in favor of chip-scale integration and wafer-level processing, both fundamental tenants of the POET approach. It is widely acknowledged that a small form factor 2x400G multiplexed FR4 integrated solution is needed at 800G and absolutely required at 1.6T, and we believe that POET is in a pole position to deliver it.”

“Further, we believe the Optical Interposer platform is among a few, if not the only, packaging technology that can provide the scale, size, power and cost requirements needed for opto-electronic applications outside of datacom and telecom, including optical computing, AR/VR, wearables, LIDAR and other more consumer-oriented products, that will require vastly larger numbers of devices to be produced annually at lower cost and higher performance."

Non-IFRS Financial Summary
The Company reported non-recurring engineering revenue (“NRE”) of $120,000 in the second quarter of 2022 compared to $209,000 for the same period in 2021 and nil in the first quarter of 2022. The Company provided services under an NRE contract to one customer in 2021. In 2022, the Company is now providing similar services to multiple customers, one of which continued to contract services from last year. The revenue relates to unique projects that are being addressed utilizing the capabilities of the POET Optical Interposer.

Non-cash impact of joint venture in the second quarter of 2022 was ($0.7) million compared to nil in the same period of 2021 and ($0.4) million in the first quarter of 2022. The Company’s share of loss is approximately 88.5% of the loss of Super Photonics, the Company’s joint venture with Sanan. The Company's current share of the operating loss is a result of the high value of the Company's initial contribution. 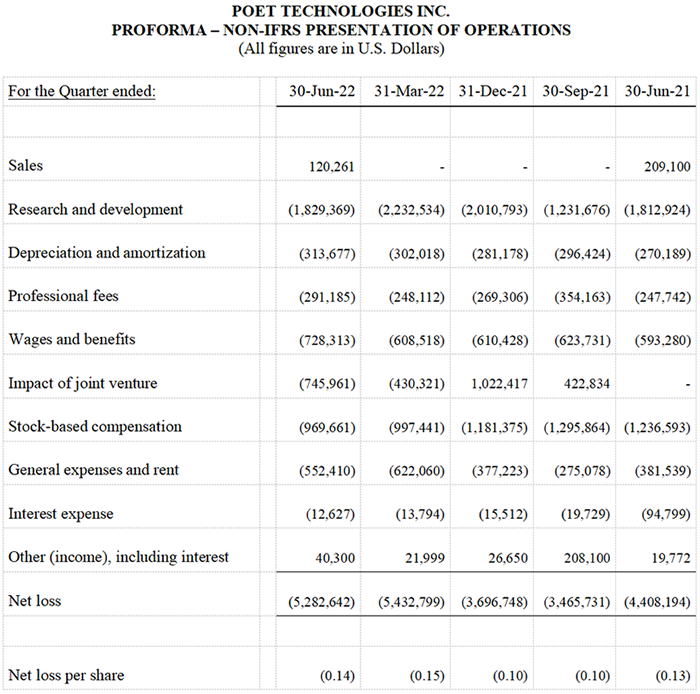 This news release contains “forward-looking information” (within the meaning of applicable Canadian securities laws) and “forward-looking statements” (within the meaning of the U.S. Private Securities Litigation Reform Act of 1995). Such statements or information are identified with words such as “anticipate”, “believe”, “expect”, “plan”, “intend”, “potential”, “estimate”, “propose”, “project”, “outlook”, “foresee” or similar words suggesting future outcomes or statements regarding any potential outcome. Such statements include the Company’s expectations with respect to the success of the Company’s product development efforts, the performance of its products, the expected results of its operations, meeting revenue targets, and the expectation of continued success in the financing efforts, the capability, functionality, performance and cost of the Company’s technology as well as the market acceptance, inclusion and timing of the Company’s technology in current and future products and expectations for approval of proposals at the Company’s annual meeting of shareholders.

Such forward-looking information or statements are based on a number of risks, uncertainties and assumptions which may cause actual results or other expectations to differ materially from those anticipated and which may prove to be incorrect. Assumptions have been made regarding, among other things, management’s expectations regarding the success and timing for completion of its development efforts, the introduction of 800G modules based on 400G optical engine developments, financing activities, future growth, recruitment of personnel, opening of offices, the form and potential of its joint venture, plans for and completion of projects by the Company’s third-party consultants, contractors and partners, availability of capital, and the necessity to incur capital and other expenditures. Actual results could differ materially due to a number of factors, including, without limitation, the failure of its products to meet performance requirements, missing the window for 800G modules based on 400G optical engines, lack of sales in its products, once released, operational risks in the completion of the Company’s anticipated projects, lack of performance of its joint venture, delays in recruitment for its newly opened operations or changes in plans with respect to the development of the Company’s anticipated projects by third-parties, risks affecting the Company’s ability to execute projects, the ability of the Company to generate sales for its products, the ability to attract key personnel, the ability to raise additional capital and the agreement by shareholders to approve proposals put forth by the Company at shareholders’ meetings. Although the Company believes that the expectations reflected in the forward-looking information or statements are reasonable, prospective investors in the Company’s securities should not place undue reliance on forward-looking statements because the Company can provide no assurance that such expectations will prove to be correct. Forward-looking information and statements contained in this news release are as of the date of this news release and the Company assumes no obligation to update or revise this forward-looking information and statements except as required by law.