TORONTO, Ontario, March 30, 2021 – POET Technologies Inc. (“POET” or the “Company”) (TSX Venture: PTK; OTCQX: POETF), the designer and developer of the POET Optical Interposer™ and Photonic Integrated Circuits (PICs) for the data center and tele-communication markets, today reported its audited consolidated financial results for the fourth quarter and year ended December 31, 2020. The Company’s financial results as well as the Management Discussion and Analysis have been filed on SEDAR. All financial figures are in United States dollars (“USD”) unless otherwise indicated.

Commenting on the Company’s recent progress, Dr. Suresh Venkatesan said, “The fourth quarter was a pivotal period for our Company, as we successfully achieved significant milestones on the path toward commercialization of new products based on the POET Optical Interposer platform. First, we released our first multi-product wafer (MPW) mask set for production, which was comprised of custom designs for specific applications and customers. Additionally, we completed and tested the designs of our newly launched product line, LightBar, a family of high-performance laser light source products for 400G FR4, 800G and Co-Packaged Optics applications in cloud data centers. We are very excited about the near-term opportunity for these products to serve as a spring-board for supplying products to large cloud-based data center customers that are aggressively seeking solutions with both higher speed and reduced cost.

“As evidence of further progress, in December we achieved an industry first with the successful test of our high-speed DML laser design ‘flip-chipped’ onto POET’s Optical Interposer platform, enabling the world’s lowest-cost and smallest 100G CWDM4 optical engine. This accomplishment is critical to the assembly of a single-chip, fully integrated optical engine that can be produced at wafer-scale in high volume. We also expanded our operations team and facilities in early 2021 with the appointment of Dr. Jinyu Mo as a Senior Vice President of Asia, coupled with the opening of a new product design and development center in Shenzhen, China.”

Dr. Venkatesan further stated, “Looking at the current landscape in early 2021, there have been broadly reported supply chain constraints throughout the semiconductor industry. This environment has introduced challenges related to the reliable and timely sourcing of lasers, which has resulted in delayed production schedules across the industry and also for POET’s alpha and beta samples. That said, we are continuing to work closely with our strategic manufacturing partners, while also exploring potential alternative sources in order to mitigate the impacts of these external supply constraints. I want to emphasize that we have continued to meet the product development milestones that are based on variables within our control, and we’ve encountered no new hurdles in terms of technological barriers or device performance. Importantly, we have a solid cash position and strengthened balance sheet following the successful financing activities completed in recent months, and we remain very optimistic about our advancement of POET’s product roadmap throughout 2021.” 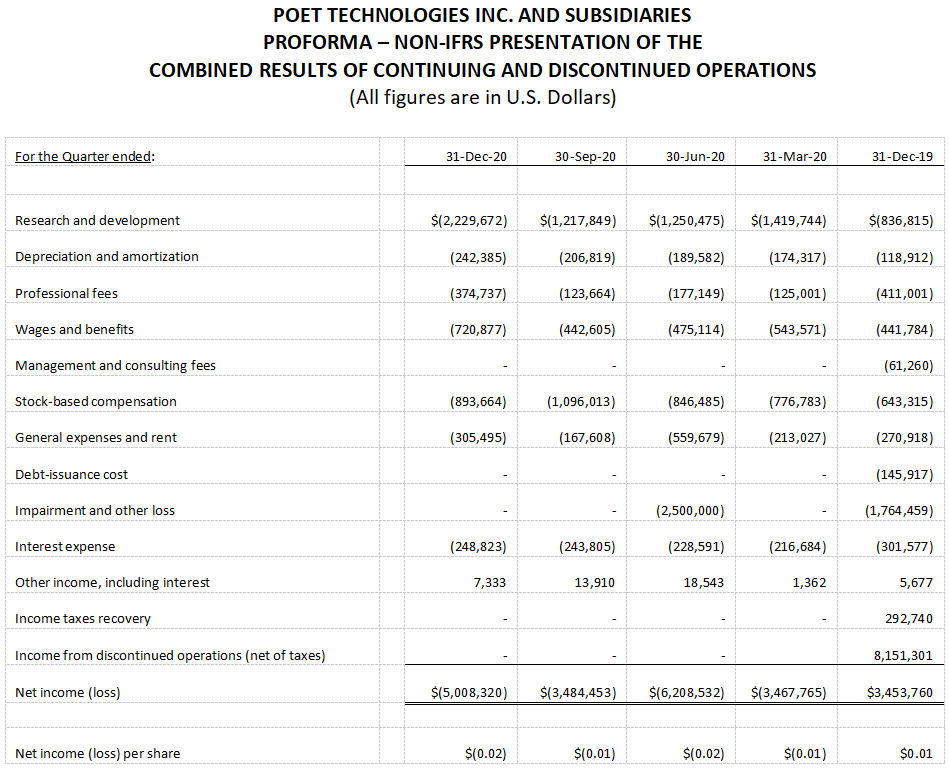 POET Technologies is a design and development company offering integration solutions based on the POET Optical Interposer™ a novel platform that allows the seamless integration of electronic and photonic devices into a single multi-chip module using advanced wafer-level semiconductor manufacturing techniques and packaging methods. POET’s Optical Interposer eliminates costly components and labor-intensive assembly, alignment, burn-in and testing methods employed in conventional photonics. The cost-efficient integration scheme and scalability of the POET Optical Interposer brings value to any device or system that integrates electronics and photonics, including some of the highest growth areas of computing, such as Artificial Intelligence (AI), the Internet of Things (IoT), autonomous vehicles and high-speed networking for cloud service providers and data centers. POET is headquartered in Toronto, with operations in Allentown, PA and Singapore. More information may be obtained at www.poet-technologies.com.

This news release contains “forward-looking information” (within the meaning of applicable Canadian securities laws) and “forward-looking statements” (within the meaning of the U.S. Private Securities Litigation Reform Act of 1995). Such statements or information are identified with words such as “anticipate”, “believe”, “expect”, “plan”, “intend”, “potential”, “estimate”, “propose”, “project”, “outlook”, “foresee” or similar words suggesting future outcomes or statements regarding any potential outcome. Such statements include the Company’s expectations with respect to the success of the Company’s product development efforts, the expected results of its operations, meeting revenue targets, and the expectation of continued success in the financing efforts, the capability, functionality, performance and cost of the Company’s technology as well as the market acceptance, inclusion and timing of the Company’s technology in current and future products.

Such forward-looking information or statements are based on a number of risks, uncertainties and assumptions which may cause actual results or other expectations to differ materially from those anticipated and which may prove to be incorrect. Assumptions have been made regarding, among other things, management’s expectations regarding the success and timing for completion of its development efforts, financing activities, future growth, the form and potential of its planned joint venture, if approved, plans for and completion of projects by the Company’s consultants, contractors and partners, availability of capital, and the necessity to incur capital and other expenditures. Actual results could differ materially due to a number of factors, including, without limitation, operational risks in the completion of the Company’s anticipated projects, a delay or abandonment of its planned joint venture, delays or changes in plans with respect to the development of the Company’s anticipated projects by the Company’s external contractors,, risks affecting the Company’s ability to execute projects, the ability of the Company to generate sales for its products, the ability to attract key personnel, and the ability to raise additional capital. Although the Company believes that the expectations reflected in the forward-looking information or statements are reasonable, prospective investors in the Company’s securities should not place undue reliance on forward-looking statements because the Company can provide no assurance that such expectations will prove to be correct. Forward-looking information and statements contained in this news release are as of the date of this news release and the Company assumes no obligation to update or revise this forward-looking information and statements except as required by law.