TORONTO, Ontario, May 28, 2020 – POET Technologies Inc. (“POET” or the “Company”) (TSX Venture: PTK; OTCQX: POETF), the designer and developer of the POET Optical Interposer and Photonic Integrated Circuits (PICs) for the data center and tele-communication markets, today reported its unaudited condensed consolidated financial results for the first quarter ended March 31, 2020. The Company’s financial results as well as the Management Discussion and Analysis have been filed on SEDAR. All financial figures are in United States dollars (“USD”) unless otherwise indicated.

Management Comments
“Building on the accomplishments we’ve made over the past year, we continue to execute on our product development milestones in 2020,” commented Dr. Suresh Venkatesan, Chairman & CEO. “The sale of our DenseLight subsidiary in late 2019 provided us the ability to focus entirely on the POET Optical Interposer platform. We successfully completed a series of milestones proving the fundamental concepts and viability of the Optical Interposer platform and are now well into the design of optical engines for data center transceivers. This accomplishment served to validate our long-standing vision for POET’s technology and we continue to engage closely with prospective customers on product design, development and deployment programs.”

“Complementing this key milestone, we’ve recruited and added to the POET team a number of accomplished individuals with proven expertise in photonics technology, products and applications. Additionally, we are actively evaluating POET’s Optical Interposer platform technology with potential partners for markets beyond data center transceivers, such as high-speed computing for artificial intelligence applications and co-packaging of optics with next-generation switching devices.”

During the first quarter of 2020, holders of certain convertible debentures converted $294,000 worth of debentures into 985,000 units of the Company. There were no conversions of debentures in prior periods. 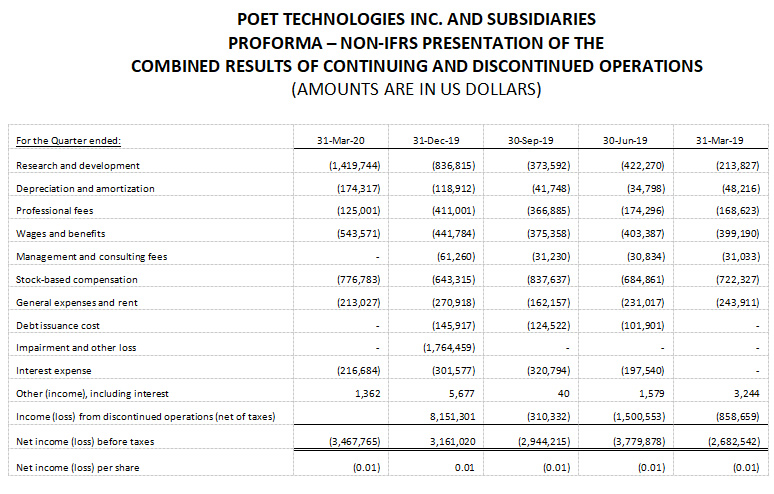