SAN JOSE, Calif., August 28, 2019 – POET Technologies Inc. (“POET” or the “Company”) (OTCQX: POETF; TSX Venture: PTK), a designer, developer and manufacturer of optoelectronic devices, including light sources, passive wave guides, and Photonic Integrated Circuits (PICs) for the data- and tele-communication markets, today reported its unaudited consolidated financial results for the three and six months ended June 30, 2019. The Company’s financial results as well as the Management Discussion and Analysis for the periods have been filed on SEDAR.

Due to the impending sale of its wholly owned subsidiary, DenseLight Semiconductor Pte Ltd (“DenseLight”), the Company is required to report the activities of DenseLight as a discontinued operation with effect from January 1, 2019. The Financial Statements filed today reflect this classification.  The Company intends to continue to operate as a single integrated entity until the sale is completed, which is expected to close on or before October 31, 2019.  For comparative purposes, all financial data below represent the combined results from both continuing and discontinued operations and is presented on a proforma, non-IFRS basis in the table at the bottom of this press release.  The required IFRS presentation of the Company’s Financial Statements can be found in its recent filings on SEDAR.

Until the time of the sale of DenseLight is closed, the Company intends to continue reporting revenues within the DenseLight operation since the bulk of its R&D, production and sales activities are conducted there.  The operation of the Company as a single integrated unit also ensures that DenseLight’s activities will continue to be directed by POET toward the completion of remaining developments connected to the Optical Interposer.  Following the closing, DenseLight is expected to remain a development resource, key supplier and strategic partner in the expansion of applications and product sales for POET.  POET intends to remain focused throughout the sale process on gaining customer interest, NRE support, successful qualification and product sales to customers for POET Optical Interposer-based solutions.

In order to provide the combined business performance and financial position of the proposed sale of DenseLight, certain non-IFRS financial performance measures have been combined to show an aggregate number. Such pro forma combined numbers are illustrative only and actual figures may vary materially. 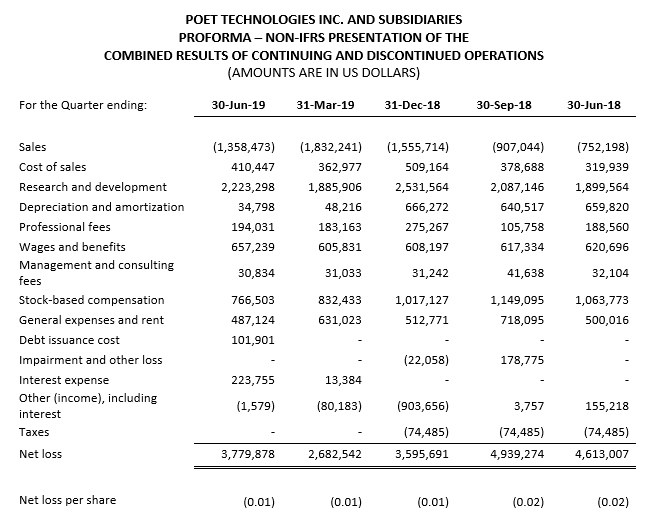 This news release contains “forward-looking information” (within the meaning of applicable Canadian securities laws) and “forward-looking statements” (within the meaning of the U.S. Private Securities Litigation Reform Act of 1995). Such statements or information are identified with words such as “anticipate”, “believe”, “expect”, “plan”, “intend”, “potential”, “estimate”, “propose”, “project”, “outlook”, “foresee” or similar words suggesting future outcomes or statements regarding any potential outcome. Such statements include the Company’s expectations with respect to the success of the Company’s product development efforts, the expected results of its operations, meeting revenue targets, completing the sale transaction of DenseLight, and the expectation of continued success in the financing efforts, the capability, functionality, performance and cost of the Company’s technology as well as the market acceptance, inclusion and timing of the Company’s technology in current and future products.